Ingetecsa has a range of reactors, dryers, roasters and flash coolers in its program to realise a complete dextrinisation process, based on a white dextrin.

A dextrin is a de-polymerised starch. By cutting the chain structure of the starch, its functionality changes. To make a dextrin, basically any starch source is suitable, such as corn, wheat, tapioca, potato, pea, etc. Unlike starch, dextrins can be white, yellow, or brown. They are all partially or fully water-soluble. Furthermore, they are typically less viscous than the starch that they came from. They undergo modification by either chemicals, or temperature, or both.

Dextrins have a range of different uses. Unquestionably, the paper industry is one of the most important users of dextrins for adhesives and coatings. The chemical and mineral industry use predominantly the yellow (canary dextrins) and brown dextrins.

The food industry mostly uses white dextrins and some yellow dextrins so even though the tonnages used are still modest, the range of applications is vast and still growing.

There are three groups of pyrodextrins: white dextrins, yellow (or canary) dextrins and British gums.

Starch dextrins are produced by heating dry starch. They are also often called pyrodextrins. Pyroconversion is based on heat treatment of a dry starch with or without adding acid.

When exposed to higher temperatures, the starch starts to become darker. It is the reason why white dextrin is lighter: its heat treatment has been mild. 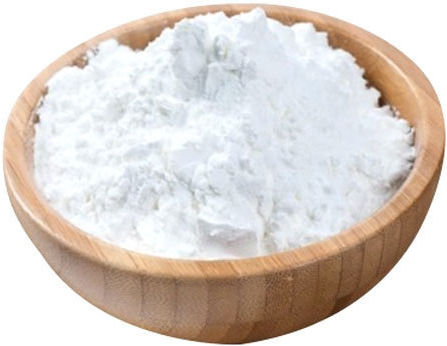 Examples of white dextrin applications in the food sector are:
≡   a crispness enhancer, in food batters, and as a coating
≡   a thickening agent for stews and soups
≡   a fat replacer in low-calorie food
≡   a soluble dietary fibre supplement
≡   a prebiotic
≡   a binding agent in pharmaceuticals
≡   a cold water soluble filler in herbal formulations

The first step in the dextrinisation process of a white dextrin is to spray the starch with a solution of an acid to adjust the pH as desired. Hydrochloric, or sulphuric acid are typically used.

The Ingetecsa reactor/granulator is ideal for this. It is a twin shaft paddle mixer and it uniformly sprays the acid on the starch. This results in a homogeneous mass. 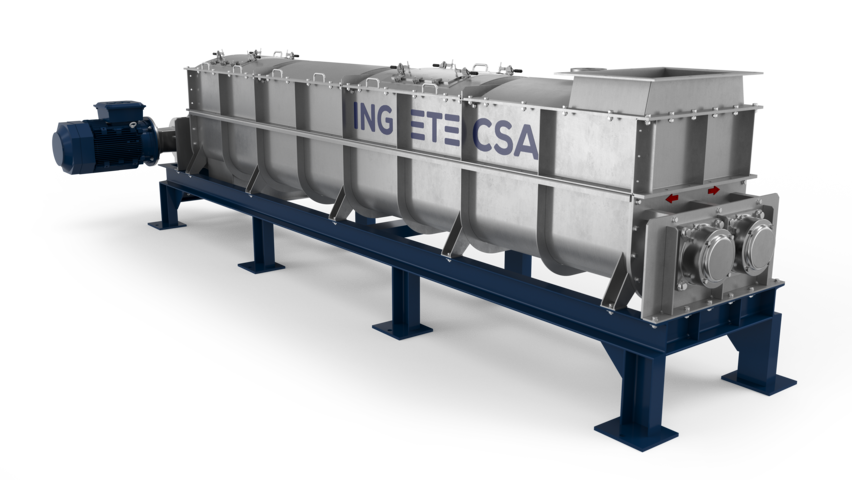 After acidifying the starch, the starch requires time for the starch to fully react with the sprayed acid. This occurs in a holding tank.

Next comes the pre or deep drying step. The starch must be deeply dried to remove most of the water before it can be roasted. Convective drying technologies are most suitable for this as their drying temperatures are sufficiently low to thermally modify the starch or start the roasting step.

The Spiral Flash Dryer has proven to be the ideal technology for this process step for a number of reasons:

≡  No hold up nor deposits of product in the drying zone. It makes the technology ideal for food applications because of its hygienic processing

≡ Drying occurs accurately to the required final moisture content before the roasting step. This is normally between the 1-4%

≡  Very deep drying of starch creates a product which is significantly more explosive sensitive. The Spiral Flash Dryer lacks moving parts in the drying zone. It cannot create a spark, unlike a classifier or disintegrator, which may generate sparks due to metal to metal contact. Classifiers or disintegrators can have build up of product on these spinning devices. Any product deposit will – apart from the need to clean it – dry out, heat up, discolour and possibly start burning with the risk of an explosion.

Separation of the deep dried starch from the drying air is realised either by very high efficiency cyclones or by bag house filters.

Once the acidified starch is deep dried, gelatinisation can no longer occur. The next step to take place is heating up of the starch, and holding it for a given time at that temperature.

This temperature profile can be accurately controlled in a twin shaft paddle dryer. By creating multiple temperature zones, the starch flows in a plug flow pattern through the machine. It gets heated up to the desired temperature. This temperature depends on the required functionality of the dextrin and can be in the range of 120-195°C. After heating up, the starch needs to be roasted at that temperature. Also here, the holding time varies per product. Most products have roasting times between 20-60 minutes.

The Andritz Gouda paddle dryer technology has the following advantages:

≡  No dead zones where product holds up or overheats

The paddle dryer indirectly heats up the product. This means the heating medium does not contact the product.

The last step prior to storage or packaging is cooling.

The starch is still at a relatively high temperature when it flows out of the paddle dryer. In order not to extend the roasting time, it is adamant to instantly cool the starch. This way, the process parameters remain controllable and reproducible.
The Flash Cooler is ideal for cooling starches and dextrins: the particle size is small and uniform and cooling occurs to just above ambient temperature in a matter of 3 seconds only.

On top of this, the Flash Cooler can transport the dextrin at the same time to the packing area, which can be an atmospherically controlled hygienic room, suitable for packing food grade ingredients.

The Flash Cooler is a technology that creates minimum thermal and mechanical impact to the dextrin and integrates well in a hygienic processing plant. 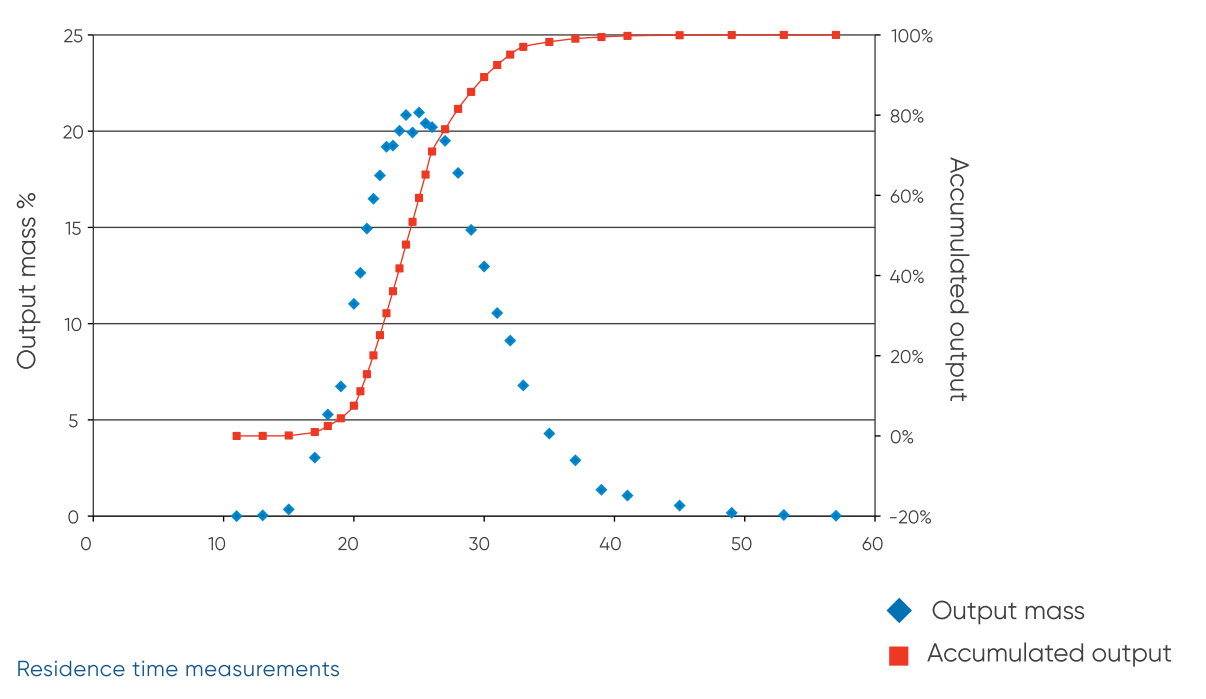 For the production of dextrin free water must be removed. After the Flash Cooling step, optionally, moisture can be readjusted by injecting water back in the particle. To not impact shelf life of the final product, water quality must be of the highest standards. Water is filtered, treated, and monitored before it contacts the final product.

Before packing or storage, screening is recommended to take out foreign particles.

How we can help

Have a look at our brochures at the download section for more information about the different thermal technologies described here above.

If you are interested how we can help you with setting up or improving your dextrinisation process, please contact us.

We look forward to helping you. We have experience with different kinds of dextrins from products such as corn, potato, tapioca, etc. and we can conduct tests in our test centre to simulate or optimise your process. 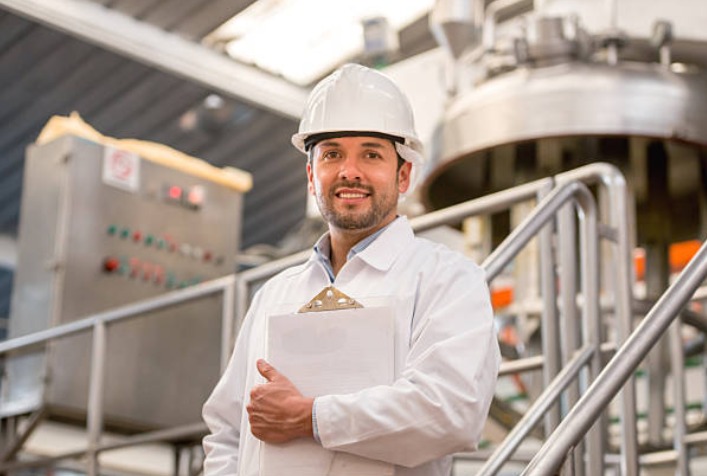